Robotics as a Service Gaining Traction in Manufacturing

Robotics as a Service (RaaS), which allows manufacturers to leverage the benefits of industrial and collaborative robots in their facility without having to buy them, is becoming popular. 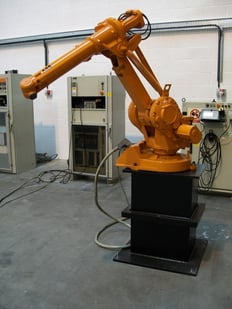 Robotics as a service (RaaS) lets manufacturers leverage the benefits of industrial and collaborative robots in their facility. In this model, manufacturers rent a robot from a vendor and pay for the hours the robot is in operation.

RaaS emerged in 2013 but has gained popularity in the industrial sector as manufacturers have become more comfortable with the idea of robots working safely alongside humans. A number of innovative offerings are now available for those looking to automate. RaaS makes industrial automation possible for nearly any operation.

Benefits for RaaS for Manufacturers

The RaaS model of renting industrial robots primarily benefits manufacturers by drastically lowering the cost of entry to robotic automation. This minimizes capital expenditures and eases the intense pressure to realize a return on investment (ROI) as quick as possible.

Further extending the benefits of lower costs, many RaaS robots require little to no integration effort and are easy to use on a daily basis. This helps minimize operating expenses and simplifies the operational aspects of introducing robots into a facility.

Another major benefit of RaaS is that the robots themselves are often built to be as flexible as possible. When robots can perform multiple tasks with little to no programming, this increases their profitability and accelerates the ROI timeline.

Features that enable RaaS to be successful

One of the enabling features of the RaaS model is the development of cloud robotics. Leveraging the cloud allows original equipment manufacturers (OEMs) to program robots remotely as well as monitor their performance and health in real time. This minimizes the maintenance requirements of the end user, which helps save time and money, and promotes higher robot uptime. Importantly, the cloud also allows OEMs to see how many hours the robot was in use and bill the robot user accordingly.

Flexible renting options are also helping promote the growth of RaaS in the industrial sector. Some RaaS providers offer trial periods lasting a few months that allow manufacturers to test a robot in their facility with little financial or operational risk. Other RaaS providers offer flexible no-term rentals that make renting a robot even more appealing.

RaaS is the latest way that robot OEMs are introducing automation in the industrial sector at increasingly lower costs. While just a few years ago RaaS had yet to catch on, it has since gained widespread adoption.

Renting robots minimizes the large upfront costs associated with robotic automation. It gives manufacturers the flexibility they need in their operations.