What is CNC and Where to Repair Yours?

CNC stands for “Computerized Numerical Control.” It is an automated manufacturing technique that allows for fast, efficient and repetitive cutting, boring, drilling, machining and fabricating of material by computer-controlled devices. Once a particular part has been designed and instructions for machining it have been written, a CNC machine is programmed with those instructions. Raw material is fed into the machine, the setup is completed and the computer automatically does everything else: rotating the part, cutting off various layers, drilling holes to desired depths and more. Identical parts can be machined over and over, with little or no variance. 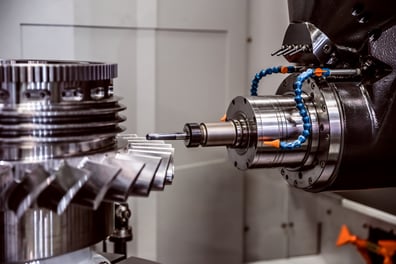 The most powerful CNC machines can fabricate several parts at the same time, such as engine blocks and aircraft landing gear. Not only can the part being machined be spun at high speed, but it can be shifted on one or more axes of movement as well. The CNC program (generated by Computer-Aided Drafting and other software packages) tells each axis motor how far to travel, in which direction to travel and when to stop. Need to cut and shape a totally different part? Just load another data file into the CNC computer.

One of the secrets to CNC is “feedback.” The CNC computer must know where everything in the machine is at all times. Just as a computer mouse tells a PC where the user wants the on-screen cursor to be, feedback devices such as optical encoders and resolvers tell the CNC host computer what everything is doing in real time: how fast the spindle is really spinning (and therefore how fast the part being machined is turning), where the cutting tool is and where it is going and where the axes (X, Y, or more) are so no collisions occur. Such tight regulation is necessary for the most efficient rates of metal cutting. Cutting bits can be changed by the machine automatically for finer cutting or adjusting for tool wear. 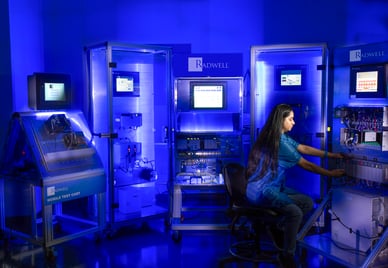 At Radwell International, our warehouse of test carts can actively run and test different parts of CNC machines from manufacturers such as GE Fanuc, Mazak, Siemens and B&R. We repair and test power supplies, PCB's, servo drives and servo motors. Lab technicians diagnose and repair all kinds of printed-circuit boards down to component level.

Dozens of companies make different kinds of CNC equipment. Some of our smaller customers don’t want to spend extra money upgrading to a newer, more powerful machine that does far more than they really need, so they want us to repair their older equipment. We can offer upgrades for particular devices, such as drop-in solid-state memory modules to replace older, obsolete paper-tape readers. 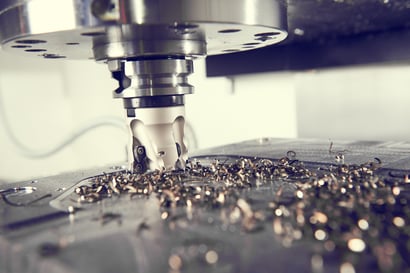 The biggest enemy of CNC electronics is heat. Fans inside, power supplies, video monitors, motors and motor drives eventually stop circulating air and the electronic circuits within soon overheat and fail. Keyboards and push buttons wear out; picture-tube video monitors eventually fail and we often upgrade them with modern LCDs (liquid-crystal displays); “cold” solder joints form over time as electronics are heated and cooled, thus causing intermittent connections between connectors, cables and components; semiconductors short out internally; electrical surges on incoming power lines can do great damage; optical sensors get blinded by debris; dust, dirt, metal chips, and oil find their way inside to the electronics and cause all manner of problems. We clean PCBs (printed-circuit boards) thoroughly, test all the individual components and replace whatever devices are necessary. A machine shop is one of the most hazardous environments for electronic devices.

What do people make with CNC? 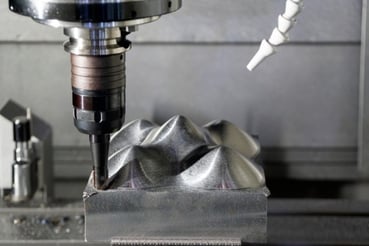 Just about anything. Hospitals design and machine their own replacements for patients’ hip joints; Jet Propulsion Laboratory has their own CNC machine shop with Fanuc equipment for making space probes (some of which are now on Mars); factories all over the world make thousands of items every day, from glass bottles to bottle caps; the oil-drilling industry is one of the heaviest users of CNC technology.

Once a part program has been written and “debugged,” a CNC machine can make identical copies of the same part repeatedly, 24/7, as long as raw stock can be fed into it. It can even do so unattended. Some of the newer machines can notify a technician off-site automatically if something goes wrong, by text message or e-mail.

Some CNC equipment manufacturers now allow operators with iPads to control their machines and download service manuals via WiFi. Hobbyists are already using smaller CNC units in their home workshops; these need periodic maintenance, too. Radwell help their customers diagnose and isolate technical problems via phone and e-mail.

Radwell Raises Over £10,000 for Local Charities in 2021 & has Ambitious Plans for 2022
Focus on People to Maximise Plant Efficiency
Radwell Breaks Record in their 5th Annual Food Drive